The dream that inspired the St. Louis Arch was only possible through modern engineering. Designed by Architect Eero Saarinen and van Zelm Engineers, it soars 630 feet into the sky. As the highest monument of its kind, it is 75 feet taller than the Washington Monument and 325 feet taller than the Statue of Liberty. From drawing board to reality, the St. Louis Arch is one of mankind’s boldest engineering and historic achievements ~ created to commemorate the past and inspire the future.

The “Gateway Arch” as the Jefferson National Expansion Memorial is frequently called, is a stainless steel clad, steel and concrete structure, rising from the banks of the Mississippi River in St. Louis, MO.  Its shape is in the outline of a modified weighted catenary – the mathematical equations for which are shown on the first page (ARCH-1) of the project architectural drawings.  The cross-section of each leg is an equilateral triangle of constantly decreasing dimension (54 ft wide at the base and 17 ft at the top) as it rises to meet the other leg at the apex of the Arch, 630 feet above the base.  The Arch is also 630 feet across its base. There are no parallel sides or 90° angles in the structure, consequently the design challenges of the MEP (Mechanical-Electrical-Plumbing) systems are far from standard or routine.

Much has been said and written about the superb structural design and the construction of this complicated and outstanding structure, but little or nothing about the non-standard mechanical and electrical systems that are needed to make the below-ground Visitor Center an outstanding space, and visitors’ trips to the observation deck at the top of the Arch possible through all the seasons of the year.

The constantly changing shape of the structure and its varying exposure to solar loads present an HVAC design challenge. Heating and cooling loads vary constantly from one leg to the other and within the individual legs of the Arch as they curve and taper in cross-section toward the observation deck that has a capacity of up to 200 persons.

Visitors reach this location via a “tram” of eight capsules that run up each leg from underground loading areas at the base of the monument.  The equipment that moves the trams is modified elevator machinery (M-G type), located beneath the floor of the Observation Deck.  The environmental air in each leg is provided by a high velocity double duct system (30” H2O present at supply fan discharge) where hot and cold air is combined in mixing boxes at several levels in the legs. .Since long transmission distances exist and space within the crossection is extremely limited, it was important to minimize the diameter of the ducts; hence the high pressure/velocity air.  To provide appropriate conditioned air in the local interior spaces, thermostatic control is provided by a pneumatic T.C. system.

A portion of the supplied air from the interior of the legs is exhausted through dampers located in the ceiling of the Observation Deck to provide the space with appropriate amounts of fresh conditioned air.  Each leg thus serves as a giant plenum from which return air is withdrawn at each base and drawn to the underground fan rooms.  There, the systems combine return air with fresh air to condition and return it to the double duct system and the Arch.

Another little-perceived problem is the collection and disposal of vast quantities of storm (surface) water that accumulate in the paved areas and the grand stairways that serve the underground visitor center between the legs.  To prevent flooding, this must all be pumped from lower levels into a storm drainage system by multiple and duplex pumping equipment with its normal electrical power backed up by reliable standby power systems.

The ‘Tram” systems in each leg that transport millions of visitors each year to the observation deck consist of a “train” of eight capsules drawn up the legs of the Arch by modified elevator machines below the deck. During the trip time of approximately four minutes, the eight, five-person capsules in each train are individually leveled by electric gear motors as the angle of the supporting track changes constantly during the journey.

Power for the leveling gear motor, the lighting and the sound system is delivered to each moving capsule from a local transformer through brushes in contact with copper bus systems between the rails that provide the supporting pathway for the capsules.

Standard elevator “trail” cable cannot be used because of the convoluted pathway of the tram.  The commercial power source for the entire complex is from a utility supplied 277/480V spot network located at a service entrance tunnel a considerable distance from the bottom of the Arch legs.  Therefore making voltage regulation at loads an issue.  Distribution in the arch is at 480 volts with local transformers to produce 120/208 volt power as required.

Frequent lightning strikes require a substantial grounding system to conduct charges to the earth at the bedrock in which the legs are anchored. Extensive surge protection is provided at various levels in the power and lighting risers to limit any induced voltages in the system that might compromise the BIL of the components.

Lighting in the stairwells which are non-public areas, but might “in extremis”, be used for emergency egress, as well as in modified conventional (slanted) elevators (for service use only) to the 372 foot level, is 120V and controlled from panel boards located along the stairs at various levels.  This lighting illuminates the interior of the structure and the stairs which can be viewed from the windows of the ascending tram capsules, thus lessening the claustrophobic effect of the approximately four minute journey to the top.

There is a load control and load shedding system for conservation of capacity while operating on emergency diesel generators.  Due to budget constraints there initially was only one sizeable diesel powered unit (now there are two – affording more dependable backup).  Pumping storm, drainage and sanitary waste water from this basically underground (Visitor Center) site during extended power interruptions is a major task for the backup electrical system as well as the more obvious requirement of lighting and power for orderly removal of visitors.

The systems described above thus provide, with their unseen but dependable performance, the capability of this outstanding Monument and National Park to accommodate millions of visitors annually!  ~C. M. Billmyer, P.E. 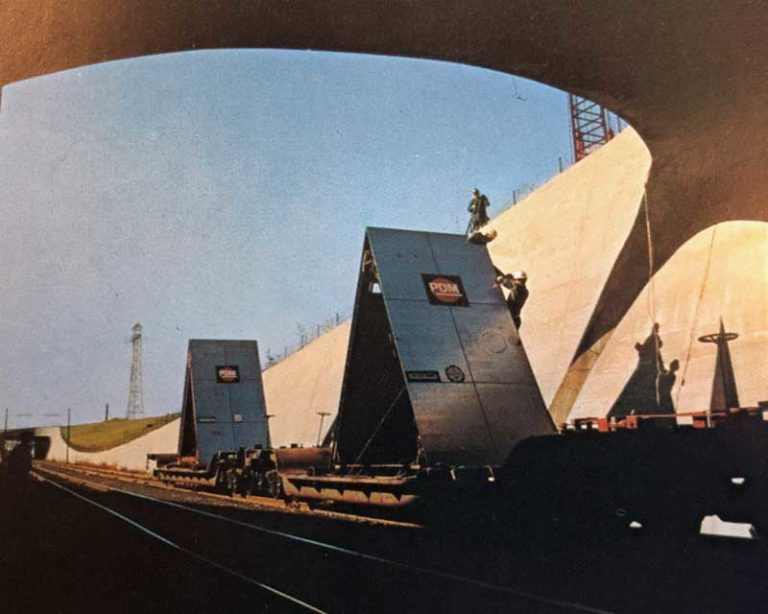 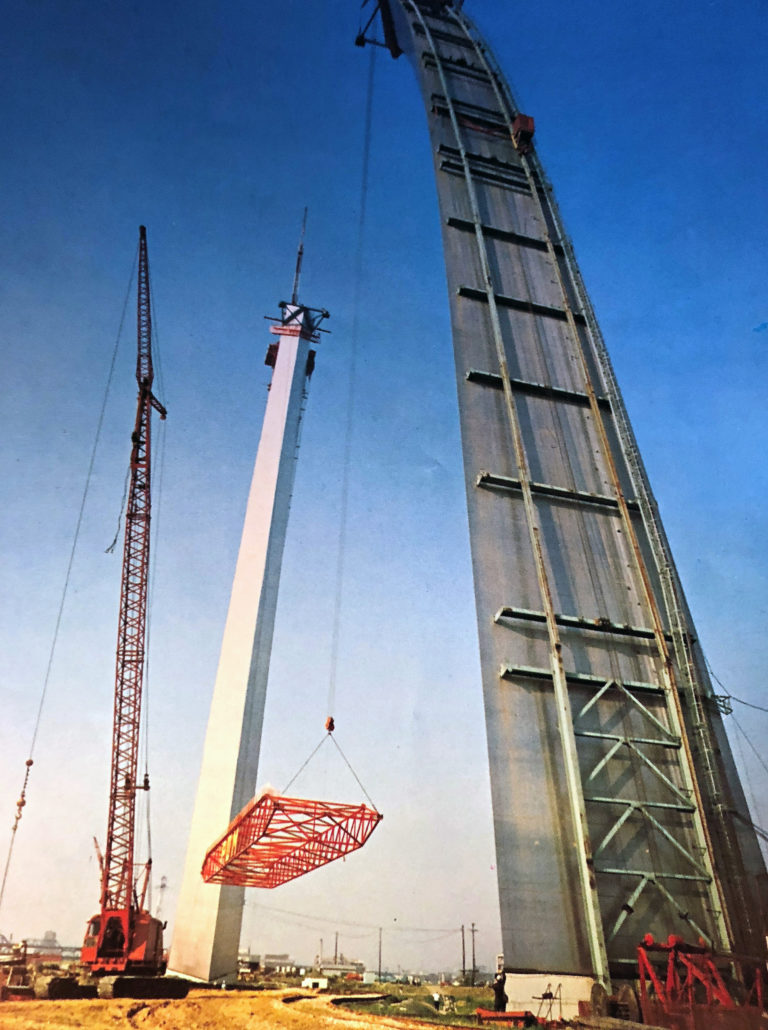 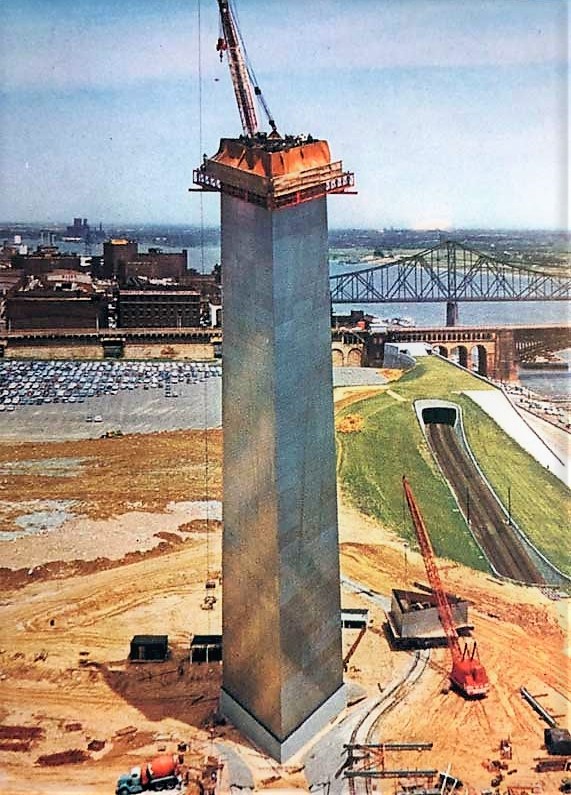 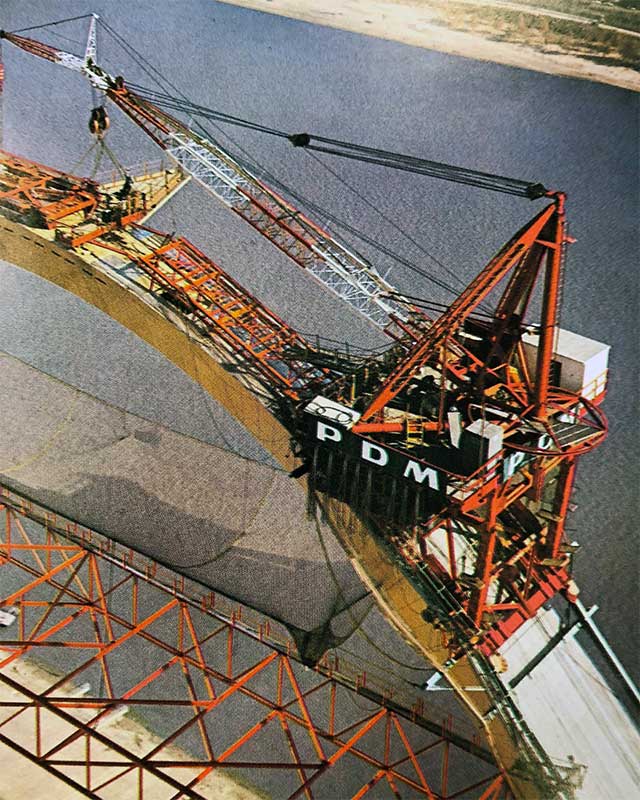 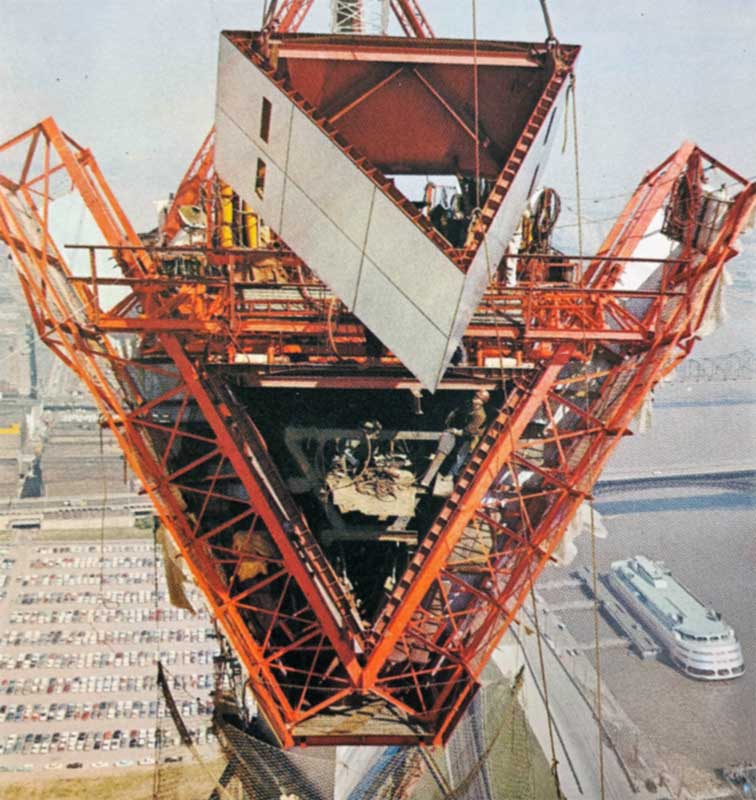 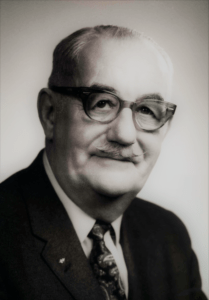 Founder of van Zelm, Heywood & Shadford, Mr. van Zelm attended Dartmouth College where he graduated in the class of 1918 with a Bachelor of Science degree. He later attended the Pratt Institute of Brooklyn, N.Y. where he earned a Certificate of Industrial Mechanical Engineering. After working for a number of other engineering companies, Henri established his own firm in 1930, from which the existing firm grew. Mr. van Zelm retired in 1973, and was honored as “Engineer of the Year” in 1974 by the Connecticut Society of Professional Engineers. 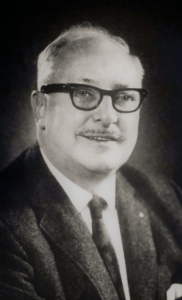 Walter J.T. Heywood was a graduate of the Franklin Institute in Boston. Hired by Henri van Zelm in 1935 as a draftsman, Walter was named Partner in 1956. During the 1950’s and ‘60’s, Mr. Heywood was responsible for bringing in over 90% of the firm’s many public school projects.  He also worked closely with Richard Shadford on the St. Louis Arch project.  Walter was actively involved in key engineering associations, serving as National Director and 1956 – 1957 President of the Connecticut Chapter of ASHAE (predecessor of ASHRAE).  Mr. Heywood retired from van Zelm in 1978. 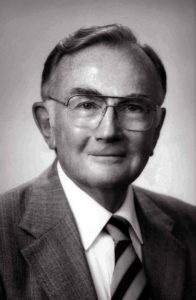 As President and CEO of van Zelm Heywood ‭& Shadford, one of Richard Shadford’s proudest accomplishments was the design of the heating, ventilating and air conditioning systems for the St. Louis Arch. He earned a degree in Mechanical Engineering from Purdue University and was a member of the Phi Kappa Psi fraternity.  Mr. Shadford also served as President of the Connecticut Society of Professional Engineers and was a director for the National Society of Professional Engineers.

Thomas A. Wunder becomes a principal.

In May First CAD system installed three (3) workstations and a pen plotter “not networked”.

Firm changes name from Henri B. van Zelm and Associates to van Zelm Heywood and Shadford Consutlting Engineers in
March.